A gastronomic affair to remember 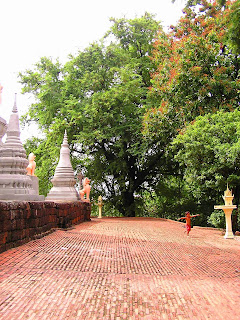 It has been close to 3 weeks now since I have moved to Cambodia to accompany my husband in his new job posting here. So far, I've come to realise that this is perhaps the most developed under developed country that I have ever been to on a long term basis. The city has that lovely balance of modern facilities, old colonial charms and majestic traditional pagodas.

Past practices and lifestyles are still maintained. While the roads are now filled with big four wheel drives, it is still dominated by tuk-tuks and cyclos, serving as public transportation. You can still catch a glimpse of men, propped up on old barber chairs, being shaved with a razor knife at the corner of a street, partially shaded from the sun by small sheets of tarpaulin hoisted on flimsy metal poles.
Compared to previous countries where I have worked or lived in (Timor Leste, Afghanistan and Ethiopia), Cambodia is pretty close to home (not just in terms of geographical proximity). In fact, our current residence situated in the area of Boeung Keng Kang I (BKK I) is more comfortable than our apartment in Kuala Lumpur.

We are particularly thankful for its power shower rather than golden shower. Previously in other countries, trying to get a decent shower in the morning was a nightmare due to low water pressure which caused the water to trickle like, well...you know. Perhaps an expat life is finally kicking in after years of struggling with poor water, sanitation and electricity supply! 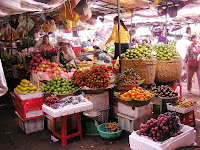 There are dozens of wet market here which provide abundant supply and variety of fresh seafood, meat, vegetables and fruits. A visit to the market will leave one thanking the wonders of creation as well as the fishermen and farmers who have painstakingly catch and cultivate these produce in the midst of harsh climate conditions.

Yes, apparently the main ingredient for Cambodian cooking is fresh food (which somehow explains why we can't find any decent can openers here). Cambodians live on a staple diet of rice, noodle, bread, fresh salad, soup and fish. For snacks, which apparently they do all day long, they munch on pickled fruits, which are sold by street vendors all over the city.
Although many people have considered Khmer cuisine as a pale version of Thai and Vietnamese food, I beg to differ. Khmer cuisine should and must be taken in its own right. Take for example, their signature dish, the fish amok, cooked in coconut milk, turmeric, galangal, lemongrass, krachai (fingerroot), slok ngo leaf and palm sugar. As you can imagine, the dish is bursting with flavours and spices without the overpowering taste of hot peppers, as we are so used to in Thai cuisine. It is gentle on the palate but yet gives a lively aromatic kick to the tongue and nose.
And the best thing is, the fish is ALWAYS fresh. I have never ever once tasted any fish dish which is otherwise and hence, staying true to their words.
Seafood is simply divine and when I first stepped into Psar Tmei (also known as Central Market), I salivated just by feasting my eyes on fresh prawns in different variety and some were even the size of my palm. Baskets of live crabs and lobsters were on display, cruelly taunting me. It's no wonder that the fishes in Tonle Sap Lake and Mekong River are in danger of depletion due to over-fishing. They are in essence the livelihood of the majority of Cambodians.
Recently, my husband and I went across the Tonle Sap River (through the Chruoy Changvar Bridge, also known as the Japanese Bridge) to experiment real Khmer cuisine after I have learned that the best local cuisine is away from all the touristic areas and across the river.
After driving past rows of restaurants, we settled for Rasmey Boeng Kak for no apparent reason. We just got tired of driving. The restaurant looked completely unimpressive from the entrance. Everything seemed dilapidated, abandoned and nobody seemed to be around. There was no sign of waiters, customers or even a kitchen.
As we were about to change our minds, someone came and ushered us inside. We were led to the back where we finally realised that it was not just a regular restaurant, it was a restaurant on stilts. Each dining area was housed in individual thatched wooden huts, balanced over a lake filled with lotus leaves and flowers. Albeit a picturesque vista, the lake was polluted with all sorts of garbage much to our dismay.
Anyway, we ordered four dishes (fish amok, barbeque shrimps, buttered prawns and shrimp noodles) after flipping through pages of food list on the menu. When the food arrived, we were pleasantly surprised with the portion served as well as the presentation and garnishing. Like Thai food, fruit and vegetable carvings are essential here in Cambodia. Food is not only to fill the stomach, but also to be feasted on with our eyes.
Although we ordered everything in small sizes, we ended up having our table filled up. We were given several types of sauces and condiments; soy sauce, big pieces of raw garlic, slices of lime, homemade chili sauce and chopped fresh chili pepper. The fish amok was truly the best so far as the chef added small chunks of peanuts in the sauce, giving it additional texture and flavour.
The barbeque shrimps were particularly interesting and enticing although a sure path to coronary heart disease, since it came with a hotplate glazed by a huge chunk of pork lard, dollops of margarine and generous portion of shelled shrimps. Why must everything that tastes heavenly be so hellish to the body?
In the end, we were proud to say we did well, leaving behind only a few strands of rice noodles and two pieces of shrimps. As we laid back with our guts about to burst and enjoyed the cool breeze, we decided on the verdict that the seafood is ALWAYS fresh. Like icing to the cake, the bill came with only USD20 for a hearty meal which could easily feed four....well less gluttonous people. 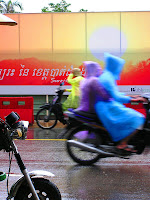 While it is probably luxurious for most Cambodians to dine in restaurants, it is no less enjoyable for them to eat on the street. I've noticed that Cambodians are very practical and simple people. For instance, when it rains, the whole city is filled with images of people in their yellow, purple, orange, blue and pink plastic ponchos, going about with their daily lives.
One of my favourite things to watch for when I walk around the city is the countless number of street food peddlers, carrying their self-sufficient portable kitchen hanging on a wooden stick supported on their shoulders. They, usually women, go around the city and stop in front of shops to cater to workers during lunch break. 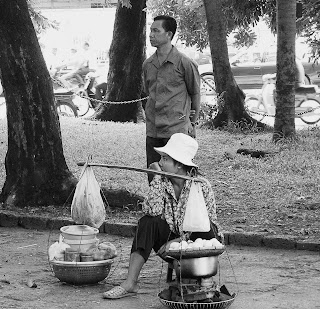 The people come, order their num pachok samlor Khmer (green coconut fish curry served on generous portion of rice noodles), either retreat back to the shop or settle down on low plastic stools to eat. Without frills, they slurp their steamy bowls of noodle soup and enjoy banters with other customers. I am always amazed by how the soup remains steamy hot as the woman ladles them out from what appeared to be a pot made of clay.

When the customers are finished, she simply collects the bowls and chopsticks, piles them up on her small wicker basket, stands up and leaves. No fuss, no trash and no rush.
What would normally be considered as taboo food for most of us, Cambodians also snack on crispy fried tarantulas and other creepy crawlies. In some parts of the country, rats fed on grain from the rice field are good alternative source of protein when other conventional meat is scarce.
One of these days, I will summon up enough courage to hmmmm....maybe not to try anything more than four legs just yet but to squat on one of those stools, praying hard that I won't spill anything and just enjoy my bowl of noodle soup.
After all, when in Rome, do what the Romans do.
Written on 26 September 2008
Posted by Ka Ea Lim at 9/26/2008 12:50:00 PM

Email ThisBlogThis!Share to TwitterShare to FacebookShare to Pinterest
Labels: Cambodia, Travel and culture