From Loyar Burok: Two Women, Two Tribes and One Journey of a Lifetime [Part II]

Two Women, Two Tribes, and a Journey of a Lifetime is a 9-part series penned by Lim Ka Ea about her one year stint in Addis Ababa, Ethiopia where she accompanied her husband on his 9th humanitarian mission. No stranger to travel and humanitarian missions herself, she learned that Ethiopia is not really Africa and Africa is not really all about national parks or long distance-runners. She also learned that being a "tai-tai" is so overrated unless there is another "tai-tai" to get into mischief with. This 9-parter tells the story of how two "tai-tais" explored Ethiopia and discovered their life as both an individual and a woman. This weekly series started with Part I: My first encounter with Africa

Part II - The faces, sound and smell of Addis Ababa

After two weeks upon arriving in Ethiopia, I soon discovered that I only liked three things about Addis Ababa; its peaceful demeanour, coffee and the mild highland climate, as opposed to the hot blazing sun I had initially anticipated. The city itself lacks the African charm I was expecting although the local residents are amiable enough with their winning smiles, often displaying extremely good oral hygiene.

Many new construction sites are mushrooming all over the city centre despite poor public infrastructure. Many roads are still unpaved and filled with pot holes, large enough to cause pedestrians much discomfort during the rainy season. 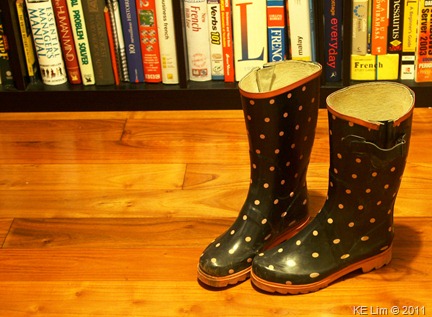 My first purchase in Addis Ababa was a pair of rubber boots although it is easy enough to find pre-pubescent children everywhere, keen to earn a couple of Birrs by cleaning and polishing your shoes to a perfect shine.

It is a city which never seem to leave me alone with constant throngs of children screaming "farenji" (foreigner in Amharic), or "China, China!" at me and the constant battle with the notoriously chaotic road traffic, dominated mainly by what most foreigners refer to as "blue donkeys"; blue and white minibuses and shabby-looking Ladas serving as public transportation. The nickname itself is attributed to the fact that most of these minibuses would often stop anywhere in the middle of the road and stubbornly refuse to budge despite the unprecedented amount of lamentation and honking received from other road users.

Poignant faces of beggars consisting of grubby-looking children, women exposing their wrinkled bosoms unashamedly while nursing their babies, elderly and the disabled, with their arms perpetually extended in hope of charity are a constant sight. For those who have just arrived in Addis Ababa, it is so easy for their hearts to surrender to these psychological assaults but after long period of such regular dosage, even the biggest Samaritan have the propensity to become immune to their plight.

The whole city is used as public latrines as local men are visibly seen releasing themselves shamelessly at every turn of the street, sometimes even right in the middle of a crowd. So, one can only imagine the rancid ammoniac scent of urine emanating the air in many parts of the city. Public littering is another vice to be reckoned with as many private property compounds are used as dumping grounds, with the exception of certain affluent diplomatic residences.

The sound of Addis Ababa stirs as early as four in the morning as devout Orthodox Christians congregate faithfully in churches all over the city. Faint but not inaudible chanting of prayers can be heard from miles away. For those living in Muslim quarters, the soothing voice of the local muezzin singing the azan, calling all believers to fadjr prayer, slowly breaks the silence of dawn.

For those who are still in bed by seven, shouts from street peddlers selling basic household items such as broom sticks, brushes and other basic household knick-knacks are sure to induce a couple of disgruntled curses, often spoiling the start of one’s morning before that hot aromatic cup of Harari coffee.

Ethiopians do like their fair share of loud music with radios belting local pop songs by Ephrem Tamiru and Teddy Afro, African-American hip-hop, reggae and rhythm and blues from grocery kiosks, coffee bars, cars and taxis. If it is not the loud music, a full blown orchestra played by hundreds of Sesame Street Honkers poltergeists along Bole Road, often referred to as the Champs Elysees Avenue of Ethiopia, receives standing ovations every single day.

Despite its fairly religious society, young urbanites are relatively open about their sexuality. The city hosts several nightclubs known for its seedy sex industry frequented by many foreigners. As a woman, I never cease to be amused by the indiscretion of local men giving persistent glances and flirtatious signals everywhere I go. Local women apparently extend the same courtesy to members of the opposite sex although in a slightly more subtle way.

In the beginning, I took it as a form of flattery which eventually turned into a liability as it became more difficult for me to enjoy my cup of coffee without feeling that I was being mentally stripped. However, with the right amount of distance and ignorance, most men often left me alone as soon as they ascertained my level of indifference.

On the opposite side of the spectrum, I found many women in Addis Ababa showing complete apathy and sometimes even hostility towards me for reasons which remain a mystery at large.

After several failed attempts to find a job in Ethiopia, I found myself falling slowly into a rut as I struggled to adjust to a new lifestyle. I began to spend a lot of time on my own as I could not find anything in common with other women whom I have met along the way. After working in challenging contexts in Timor Leste and Afghanistan, I was soon consumed with boredom, demotivation and above all, gradual deterioration of my own self esteem as I attended to daily chores of a more domestic nature.

In order to combat my boredom, I volunteered for the Ethiopian Red Cross although it lasted for five months only. As a volunteer, I was not satisfied with just the sense of altruism it created. I wanted to have a bigger role, to be part of the decision-making process, something which I was often used to while working for the United Nations in Timor Leste and Afghanistan.

The recent regular power cut imposed by the local authority in its feeble attempt to save energy three times a week in the city has further aggravated my irritation.

I tried to occupy my time by learning French, writing and improving my cooking skill, much to my husband’s dismay due to the often unpalatable results. I would sometimes go to nearby cafes to enjoy brunch with my beloved cup of strong black coffee while reading a book but most visits tend to end up with harrowing experiences of finding strands of coarse and curly human hair staring rudely at me from my food. All these perfunctory activities made me felt empty and completely dispirited.

In conclusion, I developed a progressive dislike towards Ethiopia, fed mostly by my own injured spirit. I thought that for the first time in my life, I would leave a country filled with a lot of bitterness and worst of all, with nothing to gain at a personal level.

Next: Part III - The gift of a kindred spirit

Ka Ea used to be a globe trotter. She has lived in Timor Leste and Afghanistan while working as a civic education and human rights officers for the United Nations. She then tried to be a full time housewife in Ethiopia and Cambodia but failed miserably. Now, she works with lawyers and human rights activists by day and watches Discovery Travel & Living by night. She writes for The Malaysian Insider during her dwindling free time. She longs for the day when someone would pay her to travel, eat and write.

Irada Humbatova was born in Azerbaijan’s capital Baku on 12 July 1974. She trained and worked as a midwife from 1994 to 1997, later assisting the International Federation of the Red Cross/Red Crescent with maternal health work by training and supporting traditional birth attendants in rural areas. Since then she has followed her husband on Red Cross missions around the world, developing her love for photography into a passion and profession. Inspired by Africa’s immense beauty and its people’s suffering she moved from art photography to photojournalism. She has since grown to become Reuters’ stringer for Ethiopia and work on assignments for other news outlets and magazines. Irada is currently back in Baku continuing her work with Reuters. She contributes most of the photographs in this series.