This article was originally published on The Malaysian Insider on 12 February 2012. 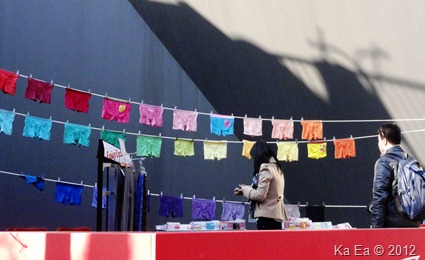 Japan was not at the top of my “must-see” list but when I found cheap tickets to Tokyo recently, my friend Sally and I put together a travel plan quickly. In addition to a long list of temples, shrines, Zen gardens, ramen restaurants and eccentric Tokyoite cultural scenes, we were told that a visit to the onsen (public bath) was essential.

When planning our itinerary, I was happy to take charge of the places to see in Tokyo while Sally did Kyoto. I was unfazed by the idea of entering a sleazy sex shop, checking in a love hotel or slotting coins into a used-schoolgirl-panties vending machine (which by the way, has been outlawed by the local authorities) but the idea of being naked in front of a bunch of people and in particular, Sally, freaked me out completely.

I was reminded of what Mom used to say, “I can’t understand these Japanese. They’re so polite, modest and conservative and yet they’re unashamed of taking a bath together.”  (Mom obviously didn’t know that the concept of bathing in private only began in the 16th century.) Mom’s prudishness came as no surprise as she saw to it that even the woman who gave birth to me should not see me naked past the age of puberty.

So naturally, I had many questions to ask when Sally’s Japanese friend, Rei, wrote, “It’s definitely worth parading in your birthday suit after a long walk in chilly Kyoto” in her email from Tokyo.

Priding myself as a curious and adventurous traveller, I vowed that I would give it a go even if I had to exhibit all the insecurities I have about my body. In order to be mentally prepared, I decided that I had to do some homework about this. I talked to a friend who had been to an onsen in Hakone and she gave the same assurance as Rei that I would get past the initial shyness once I got into the hot bath.

Rei gave us a quick run-through on the basics of bathing etiquette when we met up in Tokyo. All she said was not to stare at the other women (and men, if it’s a mixed onsen), not to immerse our heads beneath the water and not to have any item of clothing on us. Our guidebook also said that we should be seen washing and scrubbing ourselves furiously at the communal shower area before entering the bath. This would reassure fellow bathers of our cleanliness.

Would the whole place be fogged up by steam and hence help to blur one’s vision? No, not really it seems.

Could I bring along a towel with me? Yes, I could but the towel must remain out of the water at all times and even then, it is usually the size of a “Good Morning” towel.

Right, so I knew more about how to behave in an onsen and frankly not so much about what to expect since one onsen apparently differs from another, there was still the issue of getting past being naked in front of Sally. I knew we had to hatch a plan quickly.

Sally generally indulged my paranoia (borderline obsession) but any saint would have lost it when I gently suggested that she should not wear her contact lens. She screamed and accused me of being crazy. She claimed that without them, she could potentially trip and fall flat on the floor. She said the idea was for us to keep a low profile, not to draw attention. I guess she had a point there.

We finally agreed that I would enter the onsen 10 minutes ahead of her. This would allow me time to hide away from her.

Just when I thought I had everything covered, we had to abandon our plan because the actual event went like this:

When the automatic sliding door opened at the entrance of the women’s onsen, the first thing we saw was a group of women changing in front of two rows of back-to-back lockers situated right in the middle of the entrance. It took a split second for me to realise that there was not going to be any changing room, and that there was a whole lot of nakedness in one small space.

Sally and I were forced to undress next to each other since our lockers were side by side. While I was still strategising on what to do next, Sally unilaterally decided that she would be the first to go. While she stripped, I pretended as if I had never seen a locker in my entire life. It suddenly became the most interesting thing in the world. I stared and fiddled with it until I heard Sally’s voice signalling her departure.

I think it probably took me about 10 minutes to take off the layers and layers of winter clothing on me. I prayed that I would never end up in jail because this must be how the inmates wash and change every day.

What went through my mind as I walked to the bathing area, while clinging onto my rented Good Morning-sized towel for the price of 260 yen (about RM10) was, “Just follow what she’s doing.” And so, I followed whoever was in front of me and mirrored every action she took.

Not staring became a non-option as I had to look in order to follow. When the woman finally walked towards one of the tubs, I stepped quickly into the closest one. I felt an instant relief when my body sunk into the bubbling water; all private parts finally concealed.

The woman sitting next to me was watching a programme in Japanese on a flat-screen TV by the tub with one knee up. Those who came in with a towel had them folded neatly and placed on top of their heads.

I followed like a good student and in the course of doing so, I discovered to my horror that Sally was soaking in the same tub just a few feet away. I caught her turning her head away as soon as I looked at her. We pretended as if we didn’t know each other for the rest of our remaining time at the onsen.

I spent about an hour just surreptitiously watching the women around me. Honestly, there was really nothing else to do but watch and I swore that the other women reciprocated as well.

It felt like being in a crowded train where fully-clothed people are forced to sit or stand close to each other. There is eye contact and some sort of tacit acknowledgment of each other’s existence but yet you don’t speak to each other.

Of course, those who came together bar Sally and I, were seen interacting comfortably. Mothers were scrubbing their young daughters and friends or possibly sisters, chatting as if it was just a regular spa day together.

After an hour, I felt dizzy. The digital thermometer on the wall showed 43 degrees Celsius. By then, Sally had already left. I was ready to check out the al fresco bath.

It was at the outdoor area when I finally enjoyed the bath. There was nothing more wonderful and soothing than feeling the fresh cold air on my face and being delightfully warm throughout the rest of my body. I could easily live in the bath for the rest of my life.

I watched an old woman lying flat on the stone floor just a couple of feet away. She poured the highly therapeutic hot spring water all over her body with a plastic scoop over and over again.

There were girls and women from different ages, shapes and sizes (but only one skin tone) entering and leaving the outdoor bath area. By then, I was comfortable enough to sit up and let the cold air caress my upper body. The show was over. It was time to kick back and enjoy.

I left Japan with the onsen as my second most favourite highlight. For just 1000 yen (RM40), it was the best spa experience I have ever had and would never hesitate to try it again. And if anyone asks, a Brazilian wax is not needed at all.

How to kill a guilinggao?

During lunch one day, my French husband, V, and I dined at one of his favourite duck restaurants in Bangsar. After finishing our meals, I requested to have dessert. He politely declined after scanning through the dessert menu, which is often rare for his sweet tooth.

Despite living in Malaysia for a considerable amount of time, V is still unable to get past the idea of eating local desserts. To his unaccustomed French palate, the ais kacang, red bean soup, cendol, sago gula melaka, etc. are not what he would categorise as dessert.

As French, he has a whole list of rules about dessert. Shaved ice is what children eat out of natural snow during the winter. Legumes of any sorts are meant for savoury stew or soup. Don’t even get him started on cheese cake, which is not typically Malaysian but nevertheless very popular here. According to him, cheese is meant to be smelly and dessert in essence, should never ever be made out of something that could potentially smell like athlete’s foot.

So when I ordered the guilinggao, V was naturally curious.

I described to him that guilinggao is a dessert made out of black jelly and is eaten cold. It has a bitter taste and that’s why it’s accompanied with honey and longan. I explained that the combination of bitterness and sweetness is rather interesting and tasty.

He looked at me with a confused and bewildered look.

To further convince him, I went on to explain the nutritious properties of the guilinggao and how it benefits the skin and health. I thought when I said it also serves as a natural cooling system for the body, it would win him over since he complains about the heat all the time.

He gave me a sheepish smile and a mocking “hmmmm” when I finished explaining.

“Well, it’s interesting because in France, a dessert is usually sinful. You know, sugary, rich, creamy, sweet, fattening and if I may also add, appealing to the eyes. The colour, texture, shape, smell. They are all designed to entice you,” he said.

He paused and declared, “What you’ve just described to me is not dessert. It’s medicine. Black? Bitter?” *Snort*

When my “dessert” finally arrived, it didn’t look as appetising anymore.