Carrot is food. So is the stick. 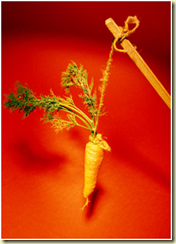 It has often been said that food unites people. But if that’s really the case, shouldn’t Malaysians be the most united people in the world?

Surprisingly, we’re not and why is that?

Look around you. Kopi tiams, hawker and mamak stalls are filled to the brim every single day and night as Malaysians of all ethnicity come together to discuss politics, relationships, sports, work and life in general. Business transactions are sometimes made over a cup of teh tarik kurang manis and roti bakar.

We obviously love to do lots of things over food and drinks. We obviously have a united understanding and appreciation for food but this isn’t really unique of Malaysia, is it?

Most cultures in the world treat food the same way as we do. Food is used as offerings to Gods, as symbols of thanksgiving and blessing, as signs of abundance, as gestures of hospitality, and last but not least, as incentives.

Carrots are food after all.

In Ethiopia, one is often hand fed by family members or close friends. This is a sign of acceptance and affection. The French can easily take from three to four hours to finish one meal. They treat food with the same pleasure as they treat sex. In Cambodia, food is served to thousands of guests at a time during a wedding ceremony. This is a sign of generosity and community.

While few cultures, especially those where food had been traditionally scarce, actually teach its followers to treat food with the utmost of reverence and respect, many use it as baits to get what they want.

We like to pride ourselves as being better than animals. We think we are the most superior specie of all living things; God’s most favoured creature and hence, often fail to realise that at the end of the day, our most natural instinct is not any different from animals.

We also believe that certain animals are more intelligent than others. For instance, horses, dogs, seals, dolphins, chimps and cockatoos are trained to perform extraordinary acts. We think it’s because of discipline, patience and often time, sheer brutality that encourage them to obey, but what really motivates them to endure the depravity of being free animals? Surely, you have noticed that with each act that is being executed successfully, a form of reward is being given. Neither the cheering nor the words of encouragement, but the food that keeps the animals motivated.

Are we any different? Don’t we sometimes use food to win the hearts and minds of other people’s children? We tell them if they allow us to come closer to them, to carry them, they’ll be given a piece of chocolate, candy or cookie in return.

I heard this joke once: Why are the Belgians famous for chocolates? And the answer is: They need them to lure children.

It’s definitely not the funniest joke when you actually understand what it tries to infer. On the other hand, Belgians are not the only one doing it. Most of us have at one point being guilty of the same crime, in the literal sense of the joke.

A huge part of my job is to organise forums and workshops. When drafting budgets and programmes for events, I am usually reluctant to include food simply because I think it’s neither cost nor time effective. By including a time slot for tea break, lunch or dinner, it means we have to spend more on our budget. Since I work for a non-profit making organisation, it’s difficult for me to see money being spent on feeding participants when it can be used for other more essential needs.

In Malaysia, we all know that tea isn’t just about serving two choices of hot beverages. It often includes two or three different combinations of savoury and sweet pastries or cakes, depending on your budget.

If you’re Malaysian, you’ll probably think I’m nuts, inhospitable or just plain frugal. Perhaps I am, but what annoys me the most is when I’m often told that without allocating money and time for food, most people aren’t going to make the effort to attend the event! I suppose this is not the worst thing that could happen when there are those who not only expect food to be served, but also insist on their palatability. I have sometimes eavesdropped on passing comments that the karipap could have been fresher, the meehoon tastier and the most popular of all, the food could have been different from the “last time”.

I just can’t believe that free food is the main attraction for most people in Malaysia and that it surpasses the opportunity for free discussion and education. To be frank, if I’m given the choice to make decisions, I’ll choose not to believe that this is indeed the case and as an experiment, will forgo free food and drink in future events. If my experiment fails, then it merely proves to me that we’re just a bunch of idiots who have not progressed at all. We’re still governed by our primal instinct to “obey” only when there’s free food.

I was in Kuching for an event recently. I ended up volunteering as an usherer. I was told to inform the guests that lunch would be served after the ceremony. I instinctively wondered whether this piece of information was crucial because a) the organiser wanted to make sure that the expensive luncheon they had prepared wouldn’t go to waste, b) to express their appreciation to the guests for attending the event, c) to display their hospitality, or d) to make sure the guests wouldn’t abandon the event before the ceremony ended.

It just felt like too much work to repeat the same sentence to every single guest when a simple announcement could have been made at the end of the ceremony.

Therefore, I’ve come to believe that food does not unite. It simply motivates and the only reason it could be perceived to unite people is because of the common motivation it provides. Without food, there will be no reason for many things in life.

How do you think most Malaysians would react to the idea of eliminating food breaks from short events?

This was published on The Malaysian Insider on 22 May 2010.

Ah Lian arrives home after a long and hard day at work. As she pulls into her parking bay, she hears a thunderous roar coming from her neighbour’s black mini Austin with dark tinted windows.

Ahmad, the neighbour, is testing his car’s engine by pressing on the accelerator repeatedly. Since the car’s engine has been modified to resemble a turbo racing monster machine, the noise becomes unbearable for the human ears.

INT. AH LIAN’S APARTMENT – SHORTLY AFTER ARRIVING FROM WORK ON THE SAME EVENING

Ah Lian walks into her apartment with a look that could easily make Darth Maul purrs in contentment. She is greeted by her housemate, Meenachi.

Do you know that fucker who has a mini Austin

parked near our parking bays?

(without waiting for Meenachi to respond)

I swear to God that I’m going to kill him one day.

I mean who the fuck does he think he is?

Making all those God damn noise?

Sabarlah, Ah Lian. What can you do?

These people have no idea how ridiculous and stupid they are.

No point getting all upset about something you can’t change.

In the next few weeks, Ah Lian is greeted by the same annoyingly loud and disturbing noise of the mini Austin. Sometimes, she tries to convey her annoyance to Ahmad by glaring at him menacingly. All Ahmad does is to double up the volume of his engine and smiles at her slyly, as if enjoying every second of her misery.

One day, she decides to take matters into her own hands.

Ah Lian and Meenachi are seen lurking behind the latter’s grey Perodua MyVi. They look around the basement several times to make sure that nobody else is around.

Ah Lian, I’m scared. Are you sure you want to do this?

I’m going in. Please watch my back.

(tears off a picture of a pig with the word “BABI!!” in capital letters written across it from his mini Austin’s window shield)

Ah Lian and Meenachi walk into the parking basement and are confronted by a seething Ahmad.

Excuse me? What are you talking about?

Ohhh....and you? You know what’s respect?

Does Islam tell you to make your neighbour’s life hell?

Does Islam teach you to attract unwanted attention

by disturbing the peace of your environment?

Does Islam not teach you to be humble and modest?

So tell me, apakah itu respect?