The Beauty and the Beasts of Harar City 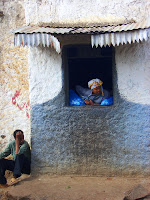 A picture taken at the old city of Harar - Ka Ea Lim
As the sky bids farewell to the sun and welcomes the moonlight, Butar, Rajoo, Mimi, Kamer, Tika, Shimay, Deeish and the rest slowly appear out of nowhere. Like vampires, they only emerge when darkness falls upon the ancient city of Harar. It wasn't eerie but in fact, simply magical. They are hyenas, part of the local inhabitants that have roamed the city of Harar for centuries.
Like any other night, they have come to be fed by the Hyena Men, Balai and Solomon, two brothers who are entrusted with the revered role of feeding the hyenas every single night, without fail. Legend has it that during the 19th century, a great famine hit the city of Harar. In order to make sure that the hyenas will not attack the people and livestocks, continuous feeding of the hyenas during good times is thought to appease them.
I have heard and read about the attractions and uniqueness of Harar many times and surprisingly, the daily ritual of hyena feeding is somehow being placed as lower priority compared to the ancient walls of the city, chat and coffee. I have gone there, seen and tried all of these but the hyena feeding was ultimately the only thing which has touched me the most.
While doing some research about the hyena feeding, I have noticed that most articles written about this failed to mention what has made this experience so magical and unforgettable; the calling of the hyenas. Unfortunately, most people who visit Harar to see the hyena feeding are never told about the calling and hence inevitably overlook this experience.
My photographer friend, Irada and I stumbled upon this by accident since we had gone to the hyena feeding site situated at Fallana Gate earlier. While most people are advised to arrive at the site around 7 to 8pm, we decided to be there at around 6pm in order for us to explore the area but mostly to avoid the potential crowd.
We were the first one to arrive at the site and our car was parked right at the front of the feeding site. I was delighted to see that the site is nothing more than any other regular residential area in Harar; simple and natural with the added value of a garbage dumpster by the side. I was a little apprehensive that the whole area would be “dolled up” to accommodate tourists.
While waiting, we also had the opportunity to interact with the local children and their friendly pet dog, Sina, who never seem to be amazed by our presence despite being used to the flocks of tourists arriving every year.While sitting in our car waiting patiently for sundown, Balai came to greet us while on his way to the cliff to start his faithful “courtship” with the hyenas. He was surprisingly a very young man and here we thought that in order to earn the title of Hyena Man, one has to be elderly and distinguished. However, he did exude a certain calmness and mature aura for someone that age.
After a very brief conversation with our driver, Balai walked away. Out of sheer curiosity and also boredom, Irada and I got off the car and followed him. After walking for about less than 100 meters, what appeared, but most importantly, what was heard before us truly stirred our hearts.
First of all, the image was astounding. Balai and his younger brother, Solomon, both stood on two rock formations, which tower above what seem to be a foliage of trees and corn plantations beneath. There are even some small houses along the path leading deep into the forest. The sun was slowly setting and there was complete silence apart from the occassional rhythmic calling of the hyenas. “Rajoo, Mimi, Shimay,......” They both took turns to call for up to twenty names; apparently that was the size of the pack. We were in a trance just by listening to them.
Balai and Solomon ignored us but continued to perform this sacred ritual with full dedication and commitment. We became brazen by their casual attitudes and took the liberty to go closer to them and climb on top of the rocks. The view was simply breathtaking and the lighting from dusk had created a sense of romanticism which made the whole experience none other than a sort of a love story between men and beasts.
After getting used to the sound of the hyena names, we couldn’t wait to see them. Being a cynic, I was waiting to witness whether any of these hyenas would actually answer to their names. We were told that the hyenas would travel a distance from as far as 10km! Occassionally, I would see some local people walking unassumingly along the narrow path leading to the houses, completely oblivious to the sound of the men and unperturbed by the arrival of the hyenas at any time soon.
We waited with abated breath and after about 15 minutes, Solomon whispered to Balai and from his gestures and tone of voice, we knew they were coming.

By then, Irada had left us by galloping down the hill towards the corn plantation, trying her luck to catch a close up photo of approaching hyenas. Only then, did Balai and Solomon become slightly agitated. In my heart, I thought, “Oh gosh, will it take only two foreigners to mess up this ancient practice?”
As soon as I spotted a hyena slowly approaching from the corn plantation, I abandoned my thought immediately. I was so engrossed with seeing one in its natural surrounding, I had forgotten about the potential danger my friend faced! Then, another one appeared out of nowhere as it slowly made its way to the top of the hill.

By then, Solomon quickly signalled Irada to come back. Soon enough, the sky was close to being dark and we were both asked to leave the site.
We obediently left and waited by the side of our car. Other tourists were already gathered with their cameras ready for feeding time. As soon as it became dark, the headlights of our car were turned on to illuminate the site. Only then did I notice four sets of luminous eyes closeby. They belonged to two hyena cubs crouching patiently not too far away, waiting quietly for the rest to arrive.

Due to negative stereotypes of hyenas conjured by cartoons and movies, I always thought that they were nasty and ugly creatures. Surprisingly, they looked cute and adorable, especially the ears. Their spotted hairy coats looked soft and fluffy.
Balai and Solomon came back followed by a pack of bigger hyenas. The hyenas were surprisingly a somber lot as none of them laughed or giggled as I thought they would. I guess feeding is serious business when it comes to the hyenas that have come to depend on the locals to fill their stomachs.
Solomon then took a weaved basket filled with long strips of raw meat and sat cross-legged in the middle of the feeding site. The hyenas definitely knew the feeding protocol as none of them came rushing after the basket.
Solomon carefully balanced a strip of meat on a stick, called out a name and then handed it out. One hyena approached him and then as quick as lightning, snapped the meat away and chowed it down. He repeated this with other hyenas until all of them were being fed. Sometimes, things would get a little bit out of control as one or two alpha hyenas turned greedy and tried to steal meat from the basket, only to be promptly chastised by Solomon with a loud slap on their backs.

I couldn’t help but smile when I saw the image of a man slapping a hyena like a child (although slapping a child is not condoned in any case!). I must say that such taming technique is by far more endearing than a whip used by circus folks.
It is also times like this when the cynicism in me vanished as I see the interaction and harmony between men and beasts.
Solomon then tried to spice up the feeding spectacle by feeding the hyenas directly from his mouth. This pleased the tourists a lot as they gaped and awed over it. Some tourists were offered to do the same, guided carefully by Solomon. While only a few managed to brave it, others changed their minds at the last second. I personally didn’t try it, not because of my fear. I was simply savouring the moment and for some reason, I was completely engrossed with my own thoughts to even notice how close I was to the hyenas and two had in fact brushed against my legs.

It was a chilling experience, sometimes I would wonder whether the hyenas might go on a rampage, but most of the time, just touched by the thought that human beings and wild animals can co-exist in harmony together, just the way nature has intended.
Unfortunately, this practice is now very much tourist-orientated.

Once Solomon emptied the basket, another man came. For added value, the man gave several performances to demonstrate his chivalry and dominance over the hyenas, much to my disgust although to the delight of many other. He was forcing one of the hyenas to lie on the floor so that he could sit on it. In my mind, I thought there was no chivalry at all since the hyenas were all fed by then.
Adding salt to injury, in the middle of his performance, his mobile phone went off and he answered it. For me, it just ruined the whole thing because then, it just proves how men will always want to dominate things. It also made a mockery out of the whole ritual by disturbing the elements of what had supposed to be a traditional practice in tune with nature. The co-existence and co-dependency between human beings and animals are being tossed out in the name of power and greed.
We left the site before the “show” ended in protest. While always believing that as tourists, we all have some level of responsibility. I hope that many would do the same. Most of the times, it is the demand from tourists which has created the supply. Without the demand, there will be no supply.
In the end, although disappointed by how the feeding had ended, I went home with a comforting thought. It is not often when we are touched by the act of human beings but sometimes that rare moments do come and it did come for me. When it comes, savour it and take the moment to see, listen and feel it with your heart.

Email ThisBlogThis!Share to TwitterShare to FacebookShare to Pinterest
Labels: Ethiopia, Travel and culture