This is a new series chronicling my journey towards looking fab by the end of 2011 (well, preferably before the year ends but who am I kidding, right?). Read Part 1 here and Part 2 here. 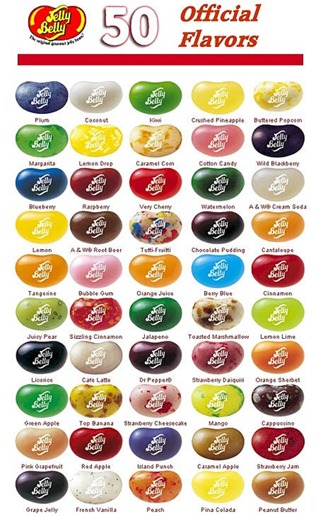 Jelly Bellies are not just candies. They’re a lifestyle. An expensive lifestyle if you’re in Malaysia.

According to its website here, there are 50 different types of flavours, each bearing a fun name that any nail polish maker would love to covet. According to a colleague, the Sizzling Cinnamon tastes like tiger balm, so maybe that’s an inspiration for tiger balm companies if they’re thinking of revamping their image and expanding their demographic target groups.

I can’t remember when I tasted my first Jelly Belly. It must had been a long time ago (possibly when I was in university and a Canadian friend might had introduced them to me) but the memory of how they taste like, the rubbery and gummy texture and fruity smell have stuck in my mind since then. So, when I went back to the US last October, I got into a gas station and remembered to buy some during a road trip to Chicago.

When the American Council for Young Political Leaders (ACYPL) delegation from the US came to visit not too long ago, they brought along one of their most famed and beloved candies. Yes, it’s none other than the Jelly Belly. 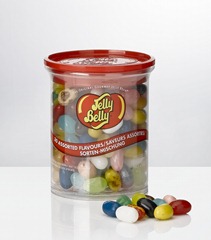 They were giving out these 7 oz clear can 30- flavour edition (see picture on the left) at meetings. Of course, some didn’t appreciate them and gave it away, much to the other’s delight. I guess, Jelly Belly is a willy-nilly after all (I’m not even sure whether I’m using the sentence correctly).

One of the pleasures of having a mix-pack such as these, is the burst of unidentifiable flavours all mixed together in your mouth. It’s not uncommon to expect a series of mixed reaction as the candies slowly melt and release their flavours onto your palate. Some of my favourites  are the buttered pop corn, toasted marshmallow and A&W root beer. What I hate are the licorice, Dr. Pepper or anything cherry. So, you’ll be hearing a series of, “yummmm….” and quickly followed by a “ewwww….what the hell?!”

And ladies and gentlemen, that’s why I love Jelly Belly beans.

Anyway, what does this have to do with my 2011 resolution, right?

So, E and I were running a really quick errand at a grocery market last night. At the check-out counter, I stumbled across rows of Jelly Belly on a shelf nearby. Although they were all accompanied by cut-throat price tags, I couldn’t help the temptation of picking up a mix-pack. E, stopped me and literally pushed me away from the shelf and reminded me that those yummy beans were going to cost me RM50.

I, of course, lost my self-control and the ability to think rationally. All I could think about was the beautiful places these beans had brought me to once, not too long ago. E wouldn’t hear of it and she went all Jelly Belly nazi on me and needless to say, she won.

I wasn’t happy but on hindsight, I’m glad she stopped me because I would be upset to pay so much for something which would inevitably cost me much more. So, thank you E for being such a good friend (unlike V who bought us cream puffs. That’s evil!)

I end this with a poem as an ode to the Jelly Belly.

p/s: This resolution sounds very promising so far and off to a good start. I haven’t lost any weight despite having less than 2 weeks to go and we’ve all declared a moratorium for Chinese New Year! God, I need someone to sponsor a personal trainer for me!!!